I tried to solve different tasks, but I was not so successful. This write-up is complete from the point of view of the solution… but I didn’t managed to get the flag.

So why am I posting it?

Because I think this is worth sharing. Be patient and keep reading ;-)

The challenge is accessible via a zip folder. The password of that zip is the flag of a previous challenge. The main contents of the folder are the following files:

Mmmh. What the hell? Let’s read the lore. Be careful in reading this… because this lore matters. You’ll understand why at the bottom of this write-up.

Basically, each tuple corresponds to a bullet! I have a (x,y) position, the speed of shooting, the angle above the horizontal and direction from shooting position. It’s simple 3D physics: I need to calculate the trajectory of the bullet and it’s impact point.

SPOILER: I was given a little aid by my dear brother Andrea (who is a Physicist). I learnt something new while reasoning with him. I’m not talking about calculus, formulae or physics laws, but lateral thinking in general. Having said that, let’s do some algebra.

The physics behind this challenge

I’m going to refer to \((x,y)\) for the position, \(v\) for speed, \(\theta\) for angle above the horizontal and \(\alpha\) for the direction. First of all, I need to understand how much time the bullet needs to fall to the ground again. I can state that:

When it will reach the ground? On the vertex of the parabule, \(v_z\) is zero, then \(v_z\) must be the opposite of \(v_{z0}\) when it will touch the ground. It’s not an out-of-the-blue result, I just used the law of conservation of energy: the sum of kinetic and potential energy must be constant (there is no air friction). There will be only potential energy in the vertex of the parabule, while it is only kinetic energy at the beginning and the end of the motion.

I have now when the bullet impacts the xy plane. I need now to calculate \(v_{z0}\):

It’s time to calculate how long the bullet will travel on x and y. 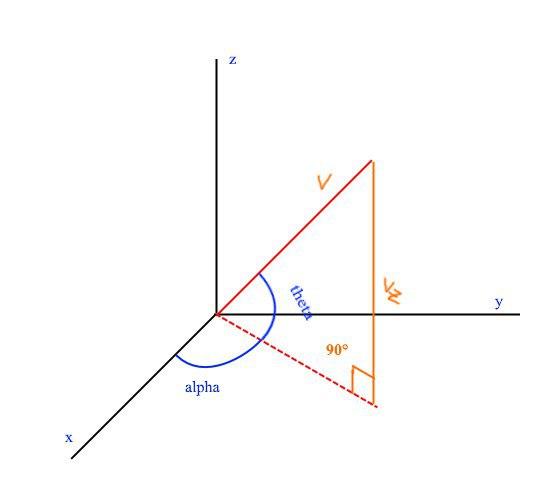 Now that I have the projections of the speed, I can calculate the impact position. I am going to use again the impact time calculated before:

Even tough the model is correct, I couldn’t match the results of examples.p file. The model calculates the trajectory of a bullet from a point \((x,y)\) in space to \((x_f, y_f)\).

IN FACT IT WAS THE CONTRARY.

It is written clearly in the lore:

So, the \((x,y)\) couple is an impact point, not a shooting point. Signs need to be flipped here:

… leading to this flag. You can find a simple script which calculates trajectory for all the points.

(SPOILER: there is a last trick, but I’ll let you discover by youself…)

We didn’t managed to capture the flag but we were so damn close. We had fun, that was the most important thing. Here you can download the points and script I used to solve the challenge.

See you next write-up ;)